The NIMH Director’s Innovation Speaker Series – A Myth of Convenience: The Law Lag and Scientific Progress 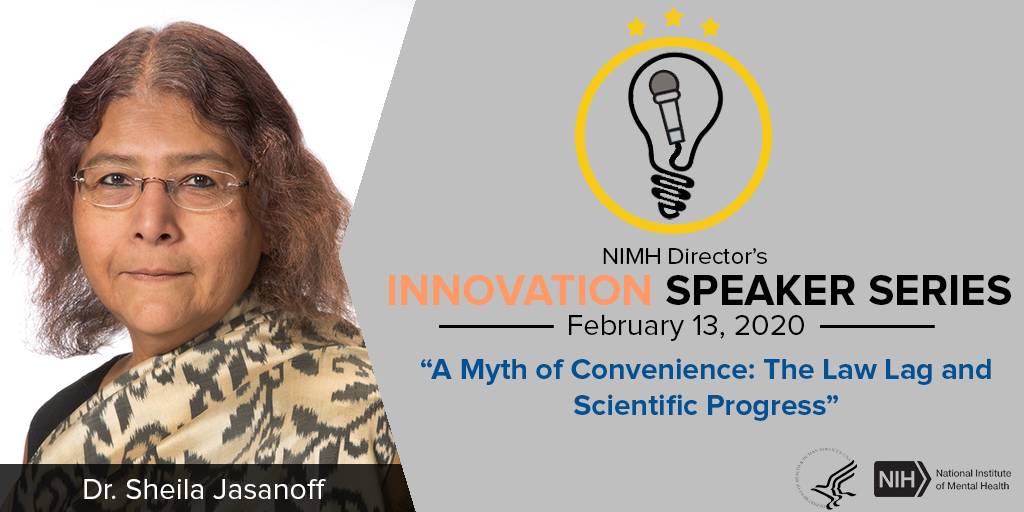 On February 13, 2020, Sheila Jasanoff, Ph.D., J.D., will present “A Myth of Convenience: The Law Lag and Scientific Progress,” as part of the NIMH Director’s Innovation Speaker Series.

One of the most persistent stories that have grown up around innovation in science and technology is that law and policy inevitably lag behind advances in knowledge and its applications. By now close to a century old, the notion that society’s moral work inevitably trails, and worse, impedes scientific progress has gained a powerful hold on the cultural imagination. It provides a ready rationale for self-regulation in science. Using examples from genetic engineering and gene patenting to CRISPR, Professor Jasanoff will argue that the law lag narrative is descriptively inaccurate and normatively unjustifiable. In this era of rapid changes across the life sciences and technologies, we need a more sophisticated understanding of the relations between facts and values, or science and law. Those understandings, in turn, should guide future approaches toward deliberation and governance for new biotechnologies.

Sheila Jasanoff is the Pforzheimer Professor of Science and Technology Studies at the John F. Kennedy School of Government at Harvard University. She is affiliated with the Department of the History of Science and Harvard Law School. Previously, she was Professor of Science Policy and Law at Cornell University and founding chair of Cornell’s Department of Science and Technology Studies. At Harvard, she founded and directs the Kennedy School’s Program on Science, Technology, and Society (STS). In 2002, she founded the Science and Democracy Network, an international community of STS scholars dedicated to improving scholarly understanding of the relationships among science, technology, law, and political power.

Professor Jasanoff’s research centers on the interactions of law, science, and politics in democratic societies. She is particularly concerned with the construction of public reason in various cultural contexts and with the role of science and technology in national and global institutions. She has written more than 120 articles and book chapters on these topics and has authored and edited more than fifteen books.

This event is open without prior registration to all NIH staff and the public. Parking is available at a nominal fee. A government-issued photo identification card (such as an NIH ID or driver's license) is required to enter the building. This event will be available over the NIH videocast at https://videocast.nih.gov.

The NIMH Director’s Innovation Speaker Series was started to encourage broad, interdisciplinary thinking in the development of scientific initiatives and programs, and to press for theoretical leaps in science over the continuation of incremental thinking. Innovation speakers are encouraged to describe their work from the perspective of breaking through existing boundaries and developing successful new ideas, as well as working outside their initial area of expertise in ways that have pushed their fields forward. We encourage discussions of the meaning of innovation, creativity, breakthroughs, and paradigm-shifting.

The videocast will be available on the day of the lecture at https://videocast.nih.gov.

Sign Language Interpreters will be provided. Individuals with disabilities who need reasonable accommodations to participate in this program should contact Dawn Smith 301-451-3957 and/or the Federal Relay (1-800-877-8339).