The term vasovagal syncope describes fainting that occurs in response to a sudden drop in heart rate or blood pressure. The resulting lack of blood and oxygen to the brain is what causes a person to pass out.

Doctors sometimes refer to vasovagal syncope (VVS) as neurocardiogenic syncope or reflex syncope. This condition typically occurs when the body overreacts to a stimulus that induces a state of fear or emotional distress.

Other causes may include severe pain, exhaustion, or sudden changes in body posture. Some people have a predisposition to these episodes due to a health condition that affects blood pressure or the heart.

Although a person may sometimes sustain injuries as a result of passing out, VVS is generally harmless. However, a medical diagnosis is necessary to rule out more serious medical conditions.

In this article, we outline some common symptoms and causes of vasovagal syncope. We also cover the treatment options available and provide tips on how to prevent fainting episodes.

Some people who experience VVS do not notice any warning signs before fainting. Others may have symptoms such as:

People who experience these symptoms before fainting should lie down somewhere safe. Lying down will help the body maintain adequate blood flow to the brain, which may prevent fainting. It will also minimize the risk of a fall or injury in the event of fainting.

A person who has fainted may feel tired, lightheaded, or nauseated when they come round.

VVS occurs when the nerves that regulate heart rate and blood vessel constriction temporarily lose some of their normal regulation.

Malfunctions generally occur when a stimulus, such as fear, or an abrupt change in body posture causes the blood vessels to widen suddenly. This widening leads to a sudden drop in blood pressure and a resulting lack of blood and oxygen to the brain. This lack of oxygen is what causes fainting.

People may experience VVS for different reasons. Some common triggers include:

What to do after fainting

A person who has experienced VVS may feel tired, weak, and nauseated when they come round. It is important that they rest before getting up and continuing with their day.

In some cases, people may need to seek emergency medical attention after a fainting episode. Generally, medical care is only necessary for people who experience the following scenarios and symptoms:

When to see a doctor

People who have previously experienced VVS should talk to their doctor if they experience any new triggers or symptoms.

People should also see a doctor if they experience fainting for the first time. However, it is not always possible to diagnose VVS from a single episode of fainting.

Some types of syncope can occur as a result of an underlying medical condition that requires treatment. Examples of such conditions include:

Typically, doctors will begin a diagnosis of VVS with a review of the person's medical history and any other symptoms. They will also conduct a physical examination. As part of this examination, the doctor will take blood pressure readings while the person is standing, sitting, and lying down.

A doctor may also attempt to rule out alternative causes of fainting using one or more tests. Examples of such tests include:

According to a 2016 review, there are limited treatment options for people with VVS. Doctors advise people with this condition to avoid known fainting triggers and take precautions to prevent injury when signs of imminent fainting begin.

Medications are not usually necessary for VVS. However, in some circumstances, the following medications may be effective in reducing the frequency of VVS episodes:

However, further studies are necessary to determine the effectiveness of these and other medical treatments for VVS.

VVS is not always completely preventable. However, a person may be able to reduce the number of fainting episodes that they experience.

A person's doctor may provide the following recommendations for preventing VVS and the associated complications:

As with prescription medications, these preventive lifestyle approaches may work for some people and not others. Various factors, such as the person's blood pressure and heart function, may determine the effectiveness of these approaches.

Vasovagal syncope refers to fainting that occurs in response to a sudden drop in heart rate or blood pressure.

Vasovagal syncope is usually not dangerous. However, people should seek medical attention if they faint when pregnant, experience additional symptoms, or fall and injure themselves when fainting. People should also see a doctor if they are unsure of the cause of fainting.

There are no standard treatments for vasovagal syncope. Instead, treatment generally involves making certain dietary and lifestyle changes, as well as avoiding potential triggers of fainting.

Medical News Today: What is the autonomic nervous system?

Medical News Today: What to know about brain atrophy 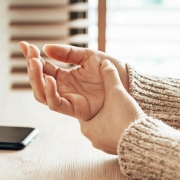 Medical News Today: 20 causes of numbness in the hands
0 replies